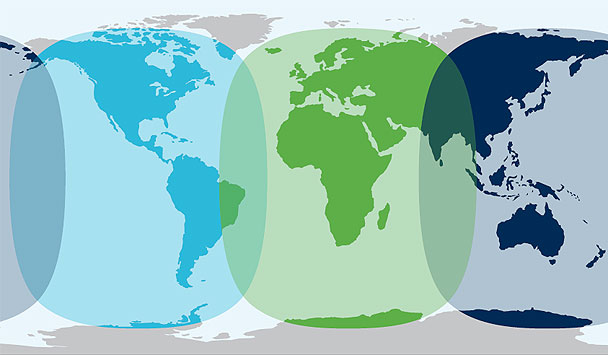 Advanced spot-beam technology allows Inmarsat satellite phones to maintain a footprint stretching across 99 countries from Western Europe and the northern half of Africa, across central and Eastern Europe, the southern CIS countries, to the Middle East and the Indian sub-continent.

The maximum bandwidth within each spot-beam is 492kb/s. But because BGAN is a packet data network, the average bandwidth available is shared among several connected users if they transmit data at the same time. However, streaming service is available in various bandwidth, providing a dedicated bandwidth.

The BGAN system allocates this capacity where needed – invisibly to the end-user. BGAN is the fastest global internet access available via a portable terminal. It is easy to set up and works well. A typical user can set up and point the terminal in a couple of minutes. Because the BGAN system uses the L-band frequency range, it is not affected by rain fade typically associated with satellite TV.